Registrations are now closed.
Export to your Calendar Print 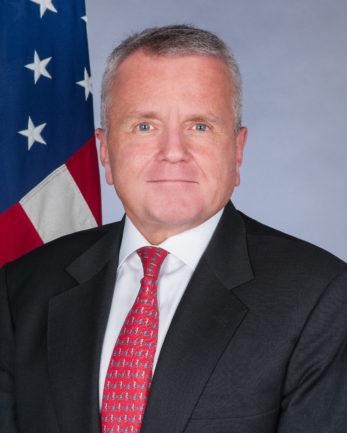 USRBC held a members-only, off-the-record discussion via videoconference with U.S. Ambassador to the Russian Federation John J. Sullivan on Tuesday, July 21st at 9:30am EDT.

Ambassador Sullivan has been an effective and knowledgeable representative to the Russian Federation on behalf of the United States, and a strong advocate for the U.S. business community broadly and USRBC members in particular.

In a moderated conversation with USRBC President and CEO Dan Russell, followed by a Q&A with questions from USRBC members, we explored with Ambassador Sullivan the current U.S.-Russia relationship in light of the global economic upheaval due to the COVID-19 pandemic and examined prospects for constructive U.S.-Russian cooperation in the future.

Ambassador Sullivan previously served as Deputy Secretary of State from May 24, 2017, until December 21, 2019. He served as acting Secretary of State from April 1 to April 26, 2018. Prior to joining the Department of State, Ambassador Sullivan was a partner in Mayer Brown LLP, and co-chair of the law firm’s national security practice. From 2010 to 2016, he was the Chairman of the U.S.-Iraq Business Dialogue. In addition to his decades of experience in private law practice, Ambassador Sullivan has served in two prior administrations in senior positions at the Justice, Defense, and Commerce Departments.